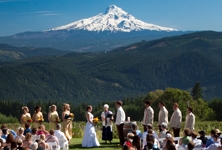 Gorge Crest Farms is located in the majestic Columbia River Gorge National Scenic Area just 10 minutes from Hood River, Oregon and Interstate 84. The site slopes gently to the south and has sweeping views of Mt. Hood, the Hood River Valley and the Columbia Gorge. The farm sits at the base of Underwood Mountain and directly borders several of the areaâs premier vineyards.

The farm was originally homesteaded as a quarter section of dry-land orchard. After the âBig Freezeâ of the 1930âs the existing 40 acre apple orchard was replanted in pears, as was most of the Hood River Valley. Over time, all but 16 acres of the pear orchard was removed as market conditions for dry-land pears deteriorated. In 2003 the parcel was purchased by the owners of Gorge Crest. At that time, the parcel had no farmhouse and no agricultural buildings to support an independent farming operation.